The Welsh Assembly Government and Newport City Council are working on an ambitious programme to regenerate and revitalise the City of Newport.
In the next 10 years Newport will undergo one of the greatest transformations of any UK City- creating a new vibrancy which will attract further economic development, as well as enjoyment and pride in Wales’s 3rd largest City.

The Government and City Council are also funding, and undertaking, a wider social and community development programme and have a number of other partnerships working for the city. The information on these boards, however, relates mainly to the Government and city’s physical regeneration programme co-ordinated by the Newport Unlimited partnership.

Set up in 2003, the Newport Unlimited partnership aims to lead, or facilitate, the regeneration of three areas:

The three development areas will be served and connected by high quality transport links which have already been improved by the opening of the Southern Distributor Road in 2004 and will be improved still further with the proposal for the new M4 south of Newport to be completed by 2013.

The vision is clear – make the city a hub for South East Wales, a place to live, work, rest and play.

The Newport 2020: Unlimited Vision Central Area Master Plan maps out a new future for Newport, establishing a vision for urban renewal that will act as a catalyst for a continuous cycle of social and economic Read more… 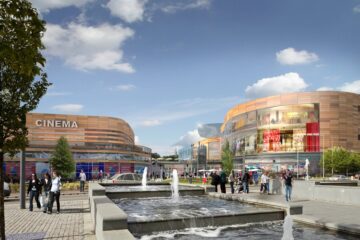 Queensberry Real Estate has been selected by Newport City Council to deliver a new modern shopping centre in the heart of Newport City Centre. Friars Walk will offer over 390,000 sq ft (36,230 sqm) of Read more…

This is a once-in-a-generation opportunity for the City to develop a higher quality of life for its residents. Newport in 2020 will be a City which is: prosperous and inviting… The revitalised City Centre will attract Read more…